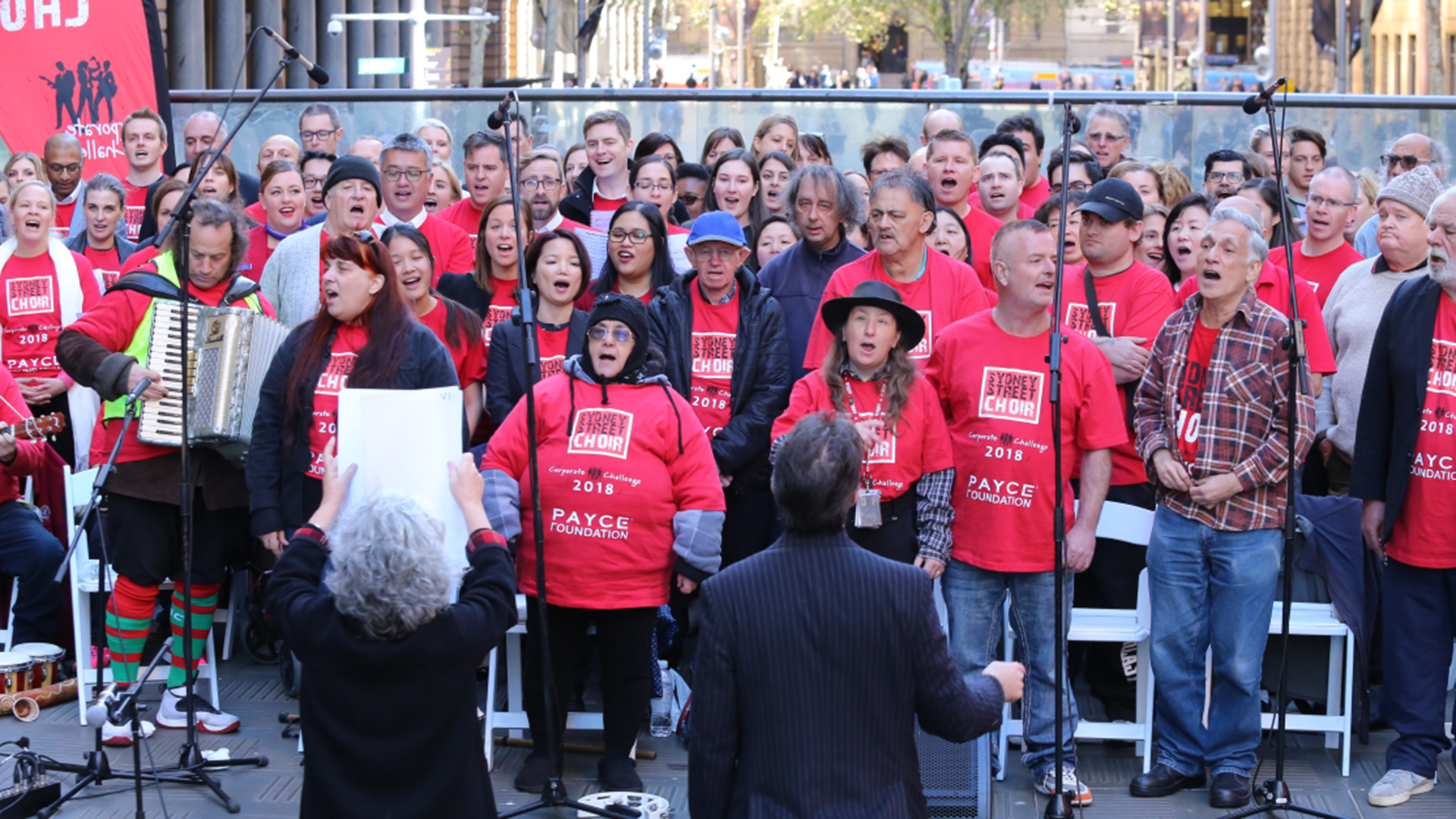 Lunch-goers and passers-by were treated to a repertoire of inspirational vocal and musical performances organised by the PAYCE Foundation and led by Sydney Street Choir musical director, James Paul.

A Welcome to Country was presented by Uncle Charles Madden, better known as “Chicka”, to get the show underway and PAYCE Foundation Director, Dominic Sullivan welcomed and thanked the audience for their support.

Mr Sullivan also thanked the choir participants for giving up their time to rehearse for the Challenge and he congratulated the corporate sector for its support of the event.

He explained that the PAYCE Foundation is the charitable arm of leading development and investment company, PAYCE.

“The PAYCE Foundation’s aim with the Challenge is to foster important connections between the Sydney Street Choir and corporate Australia and ultimately see the choir become self-sustainable,” he said.

“We also thank everyone who gave generously with donations today which will help engage a case-worker to support the choir.”

The Sydney Street Choir Corporate Challenge was first held last year and this year the number of corporate choirs supporting the event doubled.  Around 150 staff from eight organisations from the corporate world, AMP, APA, Colin Biggers &amp; Paisley, Macquarie Group, Minter Ellison, PAYCE, PwC and Virgin Australia participated in the Challenge. The event was also supported by the City of Sydney Council.

First to take to the stage to get the entertainment underway were the AMP Choir and the Sydney Street Choir who performed the Roy Orbison hit,  “Anything You Want”.  Next up was the APA Choir and the Sydney Street Choir to perform a Creedence Clearwater classic, “Bad Moon Rising”. It didn’t take long before the audience was clapping along and showing their appreciation for the inspirational performances.

Next up was the Virgin Australia staff choir who presented a most appropriate song, “That’s What Friends Are For”.  The PwC choir and Sydney Street Choir sang “You Raise Me Up” with a stirring solo by a PwC staffer that brought strong applause from the audience.

Other performances included “Weather With You” by Macquarie Choir and “Get Right Back” by the PAYCE staff choir.  For the finale, all the choirs joined together to sing “The Climb” by Miley Cyrus – a fitting selection to close off what was a hugely successful Choir Challenge.

About the Sydney Street Choir

Sydney Street Choir is a singing community formed in 2001 to support those who are homeless and/or disadvantaged by providing them with a therapeutic musical program which promotes social skills, independence and self- management, including the management of their own finances, transportation, housing and health issues.

The aim of the choir is to connect with, inspire and empower their members through creating music, performance and passionate expression that truly opens people’s hearts. Members are men and women who love music and singing and join together to bring joy to each other and those for whom they perform.

The choir’s performances are inspirational and uplifting as they share their stories of triumph over adversity through joining the Choir with a range of audiences.