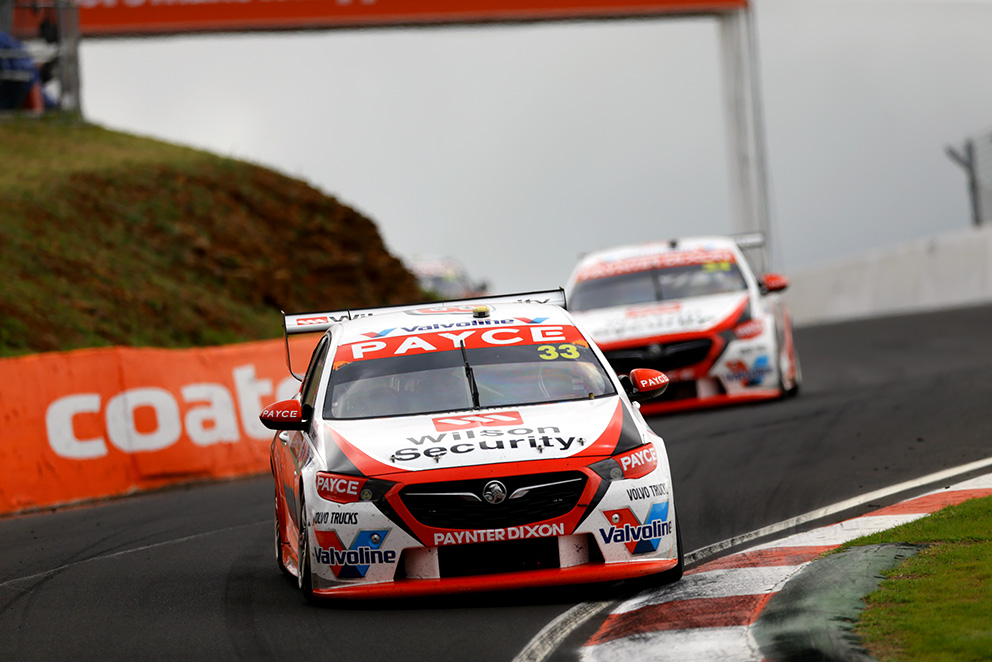 In an exciting and drama-filled Bathurst 1000, the Garry Rogers Motorsport pairings of Garth Tander/Chris Pither and James Golding/Richard Muscat ran strongly all day to cross the line sixth and eighth respectively at the fall of the chequered flag.

The team’s #33 and #34 Commodores were quick in qualifying and three-time Bathurst winner, Garth Tander put the #33 Commodore into the Top Ten Shootout after maintaining good speed throughout the qualifying session.

James Golding, competing in his “rookie” year at Bathurst as a primary driver, was unlucky in qualifying to just miss out on a spot in the Shootout by fifteen-hundredths of a second, to be placed 12th on the grid for the Great Race.

Garth was first up for the Shootout on Saturday afternoon and although his time did not improve his position, the team was happy with 10th place on the grid.

Race day dawned and after three days of wet weather, the sun finally broke through and the race started in ideal conditions.

Garth made a lightning start and by the first corner was already up five positions, while James also picked up a spot as the field settled down for the run up Mountain Straight.

Throughout the race, both PAYCE-supported cars continued to feature in the top ten, apart from when they made their compulsory seven pit stops. Good strategies and well-practiced pit work by the GRM team ensured they stayed well-positioned to the end to give them a great result.

Congratulations to Craig Lowndes on his seventh victory in the Bathurst 1000 in what was his final drive as a primary driver in the event.

In the Super2 mini enduro round run over 250 kilometres, Macauley Jones was set to take a back-to-back win in the annual race, only to have his hopes dashed when leading on the last lap. A mistimed entry into one of the final corners and a tap from behind sent him off the circuit and although he recovered he finished well down the order. GRM’s Chris Pither picked up a podium third after a consistent drive and team-mate, Mason Barbera had his second best result for the season, finishing sixth.

In Porsche Carrera Cup, reigning champion David Wall started the round in his #1 PAYCE 911 GT3 Cup Porsche with a win in race one and backed it up with a third place podium in race two. His two podiums keep him in third place on the leaderboard and in the running for this year’s championship.

In the Paynter Dixon Touring Car Masters, John Bowe arrived at Bathurst with a new motor in the #18 PAYCE/Wilson Security Torana and came away with a win and two second places after classic battles with his main rival, Steve Johnson. With John Bowe maintaining second place on the leaderboard to Steve Johnson, the championship goes down to the wire at the final round of the season at Newcastle in November.