Competition revs up at Phillip Island

Following a hugely successful debut round at Sydney Motorsport Park, the second round of the series at Phillip Island was even more competitive as drivers and teams became familiar with their two-litre, front-wheel drive, turbo cars. 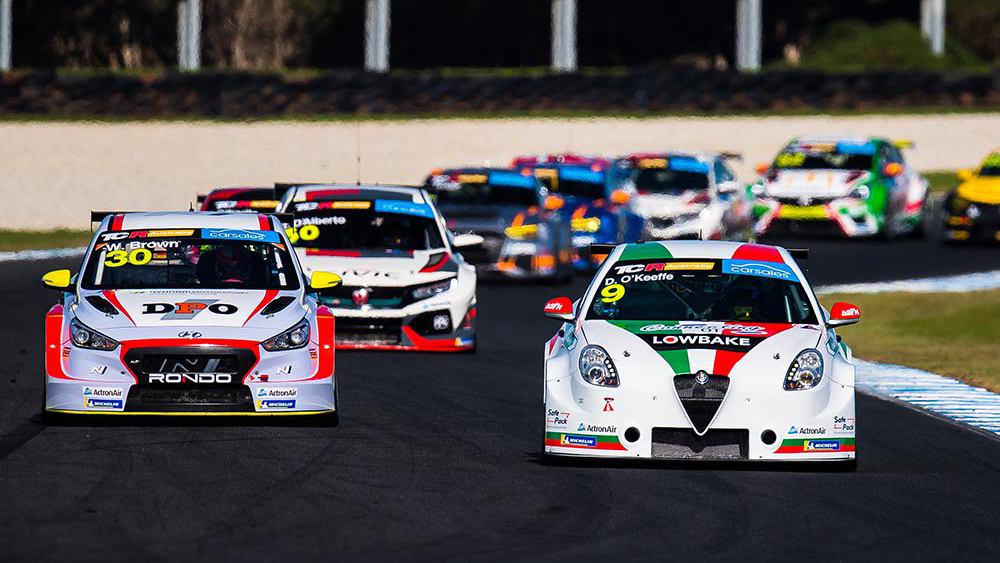 As was the case in round one, no one team or car dominated and each of the races included at least six different brands in the top ten finishers.

The first practice session showed there is no substitute for experience, with former Supercars champion, Garth Tander quick to adapt to the brand new Audi RS3.

Apart from a brief run the day before to check the recently arrived car, opening practice was his first serious drive and he continued to improve his times through the session, finishing with the top time ahead of Dylan O’Keeffe in his Alfa Romeo Giuletta.

The whole field clearly enjoyed the fast-flowing Phillip Island circuit and there were a number of excursions off track without any serious consequences. Alexandra Whitley had the honour of bringing out the first safety car when she found the gravel trap.

Practice two was equally exciting with Dylan O’Keeffe maintaining his good form to top the times after dislodging Garth Tander, who set the pace for most of the session before stopping towards the end of the session with an engine malfunction.

Qualifying on Saturday was a battle between Dylan O’Keeffe, Will Brown Jason Bright and James Moffat. Early in the session, Bright looked set to take top time, before the two youngsters, O’Keeffe and Brown, bumped him to third. James Moffat was briefly on top before his time was also eclipsed by O’Keeffe and Brown. Practice pacesetter Garth Tander finished seventh after he was another to find a gravel trap.

Race one proved to be a thriller despite two safety car periods. Dylan O’Keeffe led from the pole and was never headed as he took a lights-to-flag win with nearly five seconds in hand. Behind him though there was plenty of action in a number of hard fought battles.

Two safety car periods did help to bring the field back together after a number of cars tangled in the closely-packed midfield. Tander was awarded a ten second penalty for his clash with Martin, but Bright was fortunate to escape a penalty when he and Tander touched early in the race.

Despite an early off-track excursion, Will Brown made an amazing recovery to work his way through the field from the rear to eventually take second place with Moffat third.

Brown’s performance was a great example why this series is so popular overseas (and will be here) when it is possible to come through the field from a back mark to near the front with good hard driving.

Race two was another victory for Dylan O’Keeffe after leading from the start, only to lose it briefly to Will Brown but regain the front running when Brown made a mistake.

Behind the leading pair, the rest of the field bunched up as they ran into turn one and Moffat ran wide, spinning off the track. Others attempted to avoid Moffat, and in doing so, Tander hit the rear of Heimgartner.

There was more contact soon after as Garth Tander and Aaron Cameron came together and Garth then collided with his wife Leanne Tander (requiring some explaining back in the pits). After a quick inspection, Leanne was able to resume racing and join Cameron at the rear of the field. Garth’s race went from bad to worse with a DNF.

There was lots of action throughout the field with a number of private battles. Hamish Ribartis did well the finish third after passing Tony D’Alberto’s Honda, who capped off a disappointing race with a puncture.

Alexandra Whitley drove a consistent race and kept out of trouble to be first female home in ninth place. Molly Taylor just missed out on a top ten finish, crossing the finish line in eleventh place.

Race three saw another chaotic start with the field jostling for position in turn one. Will Brown made the best of his front row start to be clear of the carnage behind him and was careful not to repeat his off-track excursion in the previous race.

Apart from the safety car period that followed the first lap pileup, Brown was able to open up a clear gap to the rest of the field and take a comfortable win. Unfortunately, a number of cars sustained severe damage and were forced out of contention. Among them was Alexandra Whitley in her Volkswagen, while both Wall racing Hondas required repairs back in the pits.

Will Brown’s HMO Customer Racing team was awarded the inaugural “Wolfchester Winning Team” prize of $1000 as a result of the team’s win and two seconds.

Current standings in the championship after round 2 have Will Brown (Hyundai i30N) comfortably in the lead from Dylan O’Keeffe (Alfa Romeo Giulietta) and Tony D’Alberto (Honda Civic Type R) third.