Malayasian motor racing fans and a huge TV audience across the Asia Pacific region have experienced the sound and colour of Australian V8 Supercars racing, with the PAYCE supported blue Volvo Polestar S60 steered by Scott McLaughlin taking to a new street racing circuit in Kuala Lumpur for a series of demonstration runs along with four other V8 Supercars as part of the inaugural KL City Grand Prix meeting.

The August 8-9 appearance by the V8 Supercars was a partnership arrangement between the organisers of the KL City Grand Prix and V8 Supercars to showcase the Australian category ahead of a planned championship round in the city next year.

The Wilson Security Racing GRM (Volvo Polestar Racing) team was among the five teams representing the range of manufacturers involved in the V8 Supercars Championship. All the cars carried the usual branding of their supporting sponsors, including PAYCE on the #33 Volvo, giving the sponsors exposure locally and to an ASEAN audience numbered in the millions.

PAYCE Managing Director, Brian Boyd said he was delighted to see Scott’s Volvo carrying the PAYCE branding among the cars selected to represent the category in Kuala Lumpur.

“Scott and the rest of the GRM team are great ambassadors for Australia and the sport and it was a wonderful opportunity to showcase the spectacle of our series to a wider Asian-Pacific audience,” he said.

“Asia is an important market for many of the sponsors involved in V8 Supercars and the exposure over the weekend of racing was of great value.

“Congratulations to the organisers for creating a spectacular street circuit and to everyone involved in making the weekend such a huge winner for the V8 Supercars category and Australian motorsport.”

The 3.2 kilometre Kuala Lumpur circuit passes through the city’s most famous streets and past iconic landmarks, including the Petronas Towers, the tallest twin buildings in the world.

The V8 Supercars were first cars to try the new track and their initial practice session following some anxious delays waiting for the city traffic to be diverted and the final safety barriers to be placed in position. The first couple of practice sessions and qualifying for the first ‘race’ on Saturday were run under extreme wet conditions following a tropical downpour. Saturday and Sunday’s weather was kinder and the drivers thrilled the fans with three demonstration races in dry conditions.

Because it was a demonstration event, the racing over the weekend wasn’t quite as serious as back home, but all drivers found it difficult to restrain their competitive spirit and pushed their cars each time they hit the track.

All five cars finished the meeting intact, and the teams declared the visit to be a great success and appreciative of the local support and interest in the cars.

Scott McLaughlin said: “it was awesome. It could be a signature event on the V8 Supercars calendar and I can’t wait to come back.”

Following the signing of a four-year heads of agreement, the V8 Supercars will stage a championship round on the streets of the Malaysian capital until 2019 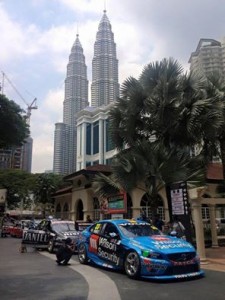 Volvo S60 V8 Supercar in the streets of Kuala Lumpur